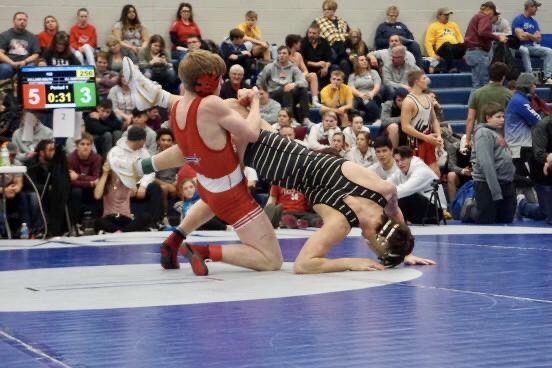 “I didn’t really start getting serious about wrestling until 4th grade,” said Robertson. “I started because a local club coach asked my dad to help with their club, so I would go along. So I guess I kind of just started wrestling one day.”

Scott Robertson is a varsity wrestler here at Millard South, but only since his junior year. His freshman and sophomore year, he was living all the way in Utah. Making the move out to Omaha was not the easiest, but Scott adapted very quickly.

“I’ve had a couple of struggles during my career, like moving to a new school right before my junior year, or last year when I had a chin infection that led to me being medically disqualified from the state tournament,” said Scott. “I think the key to overcoming any struggle though is by having the right perspective and attitude; if you always find something to be grateful for, you will get more out of each experience.”

His favorite things about-

Wrestling: “probably scrapping in the practice room and getting better.”

The Millard South Program: “You can tell that everyone there wants you to be successful and that they all love what they do.”

“I think I have lots of mentors for lots of different reasons,” Robertson said. “We have a really good team, and all of my teammates have admirable characteristics that I wish I had more of. They [his teammates that he looks up to] include Caleb Coyle, Connor Knopick, Connor Hoy, Nolan Olafson, Antrell Taylor, Tyler Antroniak, and Joel Adams.”

Robertson continued on about his teammates, saying, “I love how they are always looking out for you and trying to help you reach your goals. And I love all of the memories they have given me.”

“My favorite memory is probably this one time on an overnight stay at a tournament,” said Scott. “My teammate and I went outside the hotel and tried to catch whip cream in our mouths while 2 seniors sprayed the can outside the window.”

In order for wrestlers to stay in their weight class, they go on special diets to keep them from gaining or losing too much weight. This means that you may not get to eat very much for a week or two, making the wrestling lifestyle pretty tough.

“I have a lot of help staying on my diet,” Robertson said. “My family is pretty supportive and they do what they can, so we don’t have a ton of junk food in the house to begin with. But the main thing is that you have to want it; if you don’t have a purpose behind your actions, and in this case, your diet, then it’s easy to give in.”

To stay in shape, Scott says he just tries to “stay busy.” “I get some kind of workout in in the morning, whether it’s a run, lifting, or wrestling, then there’s practice after school, and then I usually go to the gym after that to get some more work in.”

While he is committed to the sport, he has yet to commit to a college or university, so if you are looking for a talented, hard-working, and dedicated wrestler, come hit Scott up with a scholarship so he can become a part of your program cause he has done more than enough to deserve his spot.

“I just want to say that I’m grateful for the opportunity that I have to be on such an amazing team and to have had such great teammates who help look out for me,” said Robertson. “And I want the coaches to know I’m grateful for all they have done to help me. They have helped me become the best competitor and overall person that I can be.”