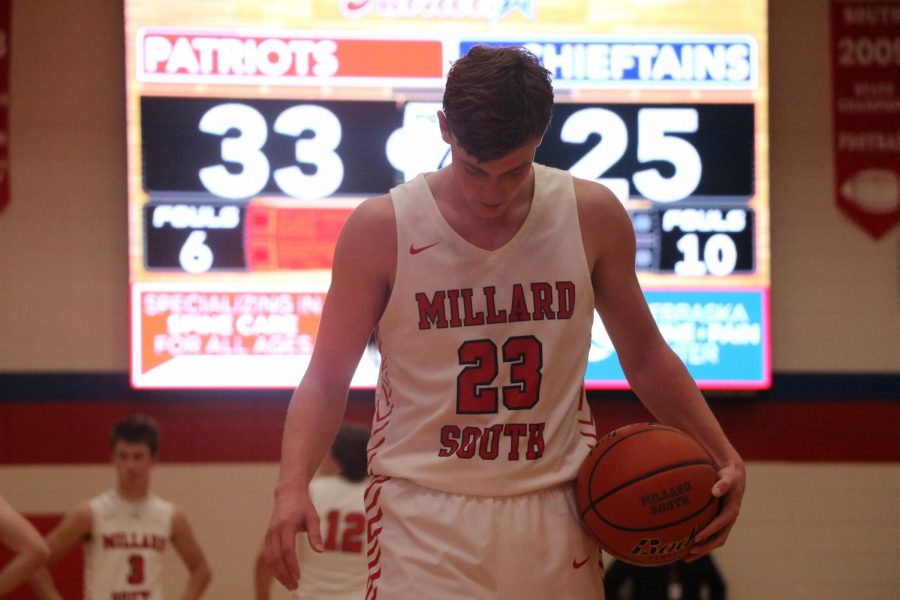 Senior Michael Harding prepares for a free throw in the game against Bellevue West. Photo by Caden Blair.

“I’ve been playing since probably kindergarten,” said Harding. “I actually started cause of my dad. He just asked me if I wanted to play anything and that’s what kind of came up and then I just started playing.”

He said, “I’ve played freshman, JV, and varsity basketball here at South. I’ve also played for the JR Patriots and Southwest Iowa Select in the summer.”

Averaging 7.8 points per game, Michael has become one of the most valued players on the Millard South team, but that honor was not the easiest or pain-free to attain.

“I’ve had a few injuries, nothing really major, but they’ve definitely affected my game,” said Michael. “But I worked with the trainers and did what they told me to do to help get back into the game.”

Harding said that even though it’s hard to keep playing, he does it “just to show everyone that I can be the best I can and just kind of keep playing and playing for as long as I can.”

He has put so much work, effort, and focus into this sport, and you can see the results pay-off.

For example, Michael’s favorite memory was “probably the games against Creighton Prep last year because I hit a game-winner against them.”

“I think a lot of my focus during games comes from just thinking about the team,” Harding said. “Being a part of the team just keeps me focused cause I just try to figure out what they need me to do, where they need me to be.”

Because his teammates have helped Michael become the best player that he can be, they have become his favorite thing about basketball.

He said, “My favorite thing about basketball would probably be my teammates because they make the game so much better whether they are good or bad. They are all so supportive and they always have my back.”

And Harding’s favorite thing about the coaches “is their ability to work with you. They just want you to get better and to see you succeed.”

Michael said, “Basketball has changed my life cause I have met so many good people that I look up to and it has allowed me to go to college as well.”

Michael plans to attend Midland University in the fall to play basketball. We are so excited and cannot wait to see what your future holds!