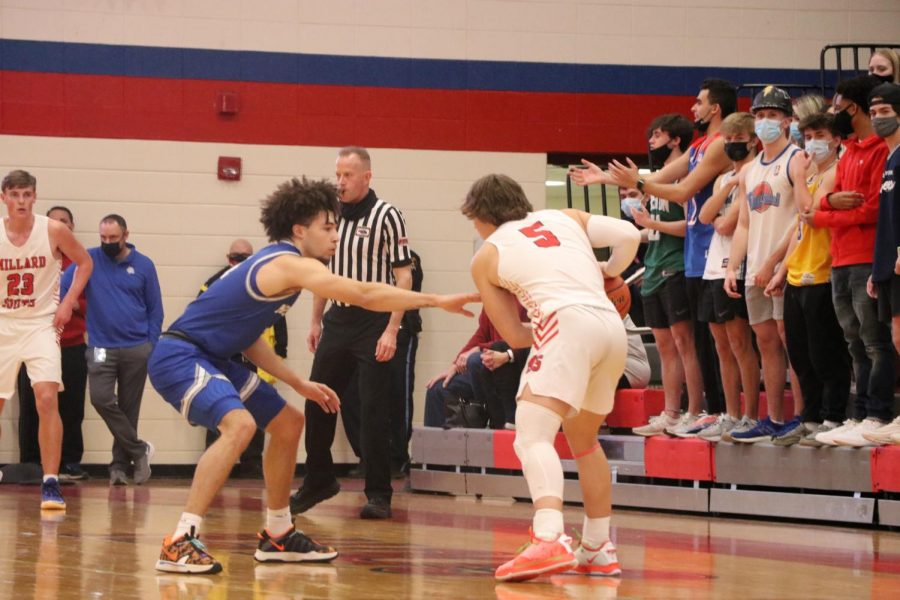 Senior Blake Stenger looks for an open pass in the game against Millard North. Photo by Caden Blair.

“I’ve been playing basketball since I was about 5,” said Stenger. “Just my family’s really into sports and has a love for the game, so I guess I kind of just started.”

Blake is one of three seniors on this year’s team, making the season extra special.

“Things that I’ll miss are probably my cousin, Gage [Stenger], Jack Cooper, and all the other teammates,” Blake said. “Plus, the coaches, especially them, just all the like locker room fun we had and after practice memories, and just playing in the games.”

But his senior season didn’t start out in the best way, facing a scary injuring during the pre-season.

“I hurt my back earlier this year,” said Stenger, “but I kind of just fought through it, and playing for and with my teammates really helped me push through.”

Blake’s favorite thing about basketball is “competing.” “I’m a competitor so it’s just fun to play the game, especially with the guys.”

“I just love how close we are,” Blake said, “nobody gives anyone crap or anything, we all just have a love for the game.”

Stenger has been on this team for a while now, supporting and leading the team to many victories, but his favorite “is probably when we beat Creighton Prep [56-55 MS] last year.” “That was a really fun game,” Blake said.

Blake’s last goal is to make it to state with the boys, something that hasn’t happened since his freshman year, back in 2018.

“Going into districts, I’m just excited how we can prove ourselves that we can play with anyone and hopefully get a shot at going to state,” said Stenger.

Hopefully, the boys will be able to make it this year, and that Blake can finish off his high school basketball career on a high note.

“I just want to thank my teammates and coaches for always being there,” said Stenger, “especially Jack [Cooper] and Michael [Harding], the other two seniors, who I’ve played with for 4 years now. We’ve been through it, the ups and the downs, so it’s been a fun ride. It’s going to be sad to put the jersey on one last time and see what we can do.”