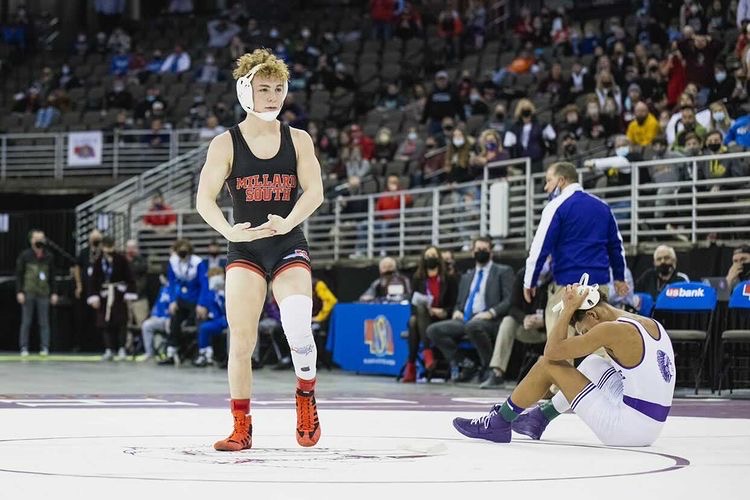 “I have been wrestling since I was five years old,” Coyle said. “I started because my parents knew I would not be very big and size doesn’t matter for wrestling.”

Wrestling all four years on the varsity team, Coyle has had quite the career, and that’s not even half of it.

“For youth, I wrestled for Meneely School of Wrestling and Nebraska Boyz,” Caleb said. ”Once I got to high school, I started wrestling club for MWC Wrestling Academy, and that’s where I still wrestle to this day.”

During his career at Millard South, Caleb has been a 4-time state finalist, 2-time state champion, and has helped the team to win 3 state championships overall. He won that second state title that Thursday, Feb. 18, which was something that he wasn’t fully able to achieve the past two years.

“My favorite wrestling tournament moment is winning my second state title as a senior against the kid who beat me in state finals two years ago, [senior Gabe Grice of Bellevue East],” Coyle said. “That loss haunted me for two years and I finally got my revenge.”

Winning that title was absolutely incredible, especially after he lost “5 matches early in the season this year.” That was hard on Coyle, but he knew he “had to stay strong mentally to come back and finish the season on top.”

On top of struggling with overcoming many hard losses, Caleb still had to restrict his diet and keep himself from giving in to temptations so he could stay on top.

“The hardest thing about wrestling is cutting weight and making sacrifices to be the best. I go on diets so that I can be in shape when I wrestle, feel good throughout the whole match, and feel strong in that weight class,” Coyle said. “When I go on a diet, I keep myself from cheating because I know that I’m wouldn’t be just letting myself down, but also my friends and family.”

But nevertheless, Caleb has pushed through with the help of his team, having one of the most incredible and jaw-dropping careers in Millard South history.

“Being a part of the Millard South program is wonderful because we are a family and have each other’s backs. A lot of people don’t like us because of our success, but nobody understands how much work we put in to be where we are at,” Caleb said, “and I think that’s my favorite thing about wrestling. Whatever work you put in, it is reflected the results you get.”

And we are so excited for Coyle’s future as he plans to continue his wrestling career at Oregon State University.

“I just want to thank the Millard South Community for all the support everyone gave me and the wrestling team over the past four years,” Caleb said. “4x State Finalist, 2x State Champ. 3x Team State Champions. It was a fun ride and I wouldn’t change it for the world.”