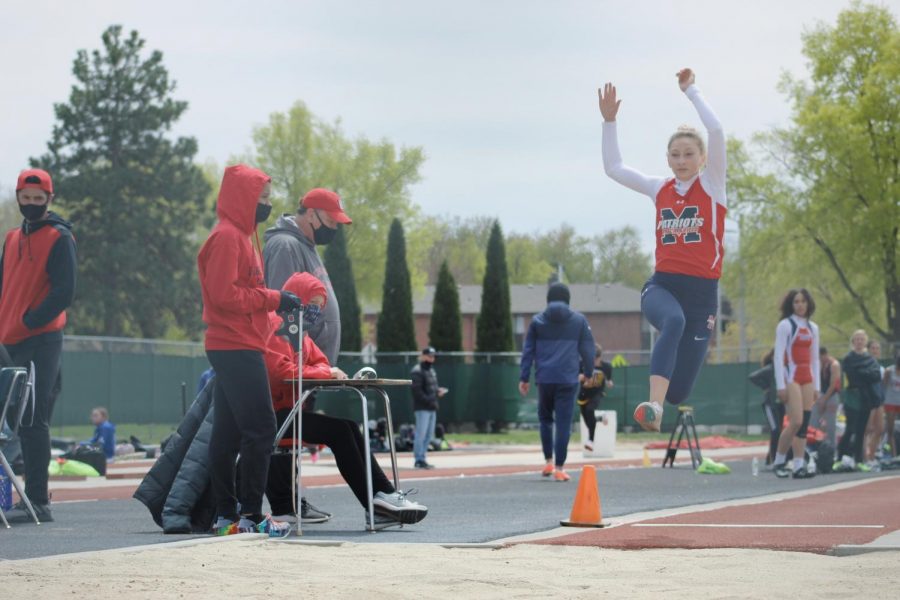 Junior Lilee Kaash jumps off the board at the Lincoln High Invite.

“I have been doing track since 7th grade,” Kaasch said. “Coach Tevis, [the head girls track coach], was my gym teacher and he thought I was fast in elementary school, so he was the one who made me want to start track.”

Starting track in seventh grade, Lilee would have never thought she would be where she is today: on the wall of records.

As a freshman, Lilee came into the program as a sprinter, but one day, she “was bounding in the wrestling room, and the coaches thought, ‘Oh, you might be good at [triple jump]. Let’s try it,’” Lilee said.

With the help of Coach Williams, who “tries to push me to be my best,” Kaasch started jumping, and soon enough she became the best triple jumper on the team.

Within her freshman year, Lilee broke the school record with a jump of 37’ 7.5 feet at the Millard South Invite and placed 5th at the State Championship meet.

“It was a really cool experience,” Kaasch said. “We didn’t really know I was going to be good at jumps because I had never done it in middle school.”

Even for someone as incredibly talented as Lilee is, the road hasn’t been the easiest.

“I had a calf injury last year, but then our season got canceled,” Kaasch said. “My back is kind of injured right now, but we’ll see what happens with that.”

But her back has not stopped her this season, as she rebroke her own school record at the Ralston Relay meet earlier this season with a jump of 38’ 3.5 feet.

“After I rebroke my record, I was super excited and actually relieved,” Lilee said. “I thought that I had peaked after my freshman year and this gave me reassurance.”

Not only is Kaasch a state triple jumper, but she is also the anchor in one of the best girls 4×100 meter relay teams, as well as a star in every other event she competes in, all thanks to senior Emily Bare.

“Emily has made me try new things, like hurdles,” Lilee said. “She is always pushing me to be my best and she makes track more fun.”

“The best thing about track is definitely the meets. Just being all together and spending time with the other athletes, that’s my favorite thing,” Kaasch said. “We’re all really close like there are not people that we don’t really get along with. We are all just one big family.”

As the 2021 state track meet approaches, Lilee looks to continue her success.

“Not having a season last year, I was very nervous for this season,” Kaasch said. “In order to get to state, I just need to have a positive mindset and listen and correct my mistakes. I plan to work and train even harder to get where I want to be.”