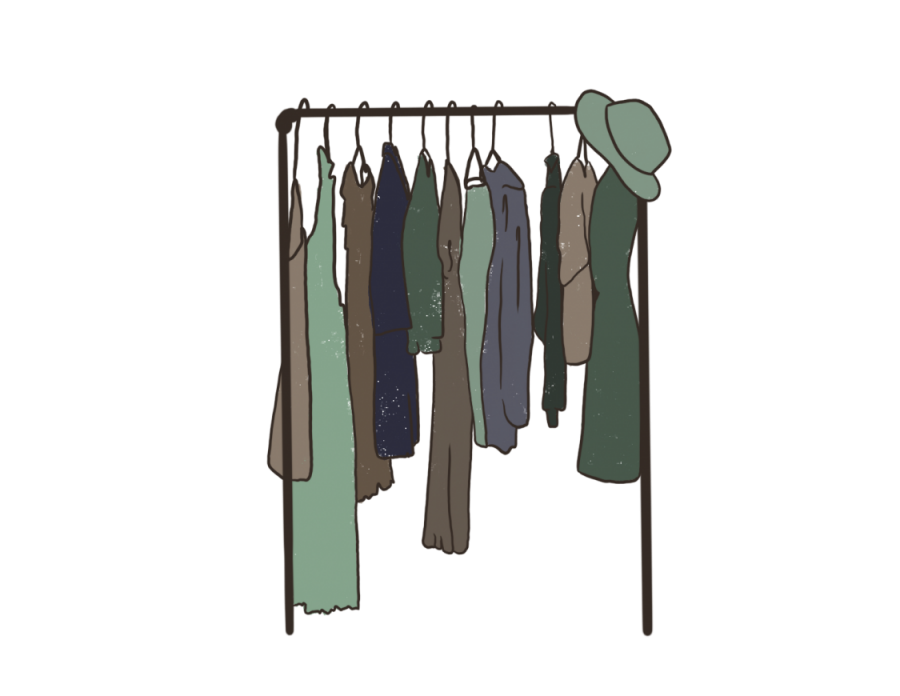 Fast fashion corporations have a bad track record when it comes to the environment. Art by Lexie Smith

Fast fashion from behind the counter

From a series on conscious consumerism

Although retail companies don’t hide it, the stores you’re getting your clothes from don’t show you behind the scenes. Fast fashion companies like GAP INC. have been feeding into toxic consumerism for decades. GAP INC. has six primary divisions; Gap, Banana Republic, Old Navy, Intermix, Hill City, and Athleta. Seeing the ins and outs of a fast-fashion company changes how you view retail and gives you insight into the impact brands have on fast fashion. You begin to recognize the problem with people’s views on the value of clothing.

Senior Irene Hawkins is a senior lead at the Village Pointe Old Navy and has worked there for over a year. Irene says, “as an old navy employee, I see a lot of fast fashion. This summer, for example, we got a LOT of terry cloth items of clothing, like hundreds of units of terry cloth styles, and we have an overwhelming amount left on clearance.” Every Monday and Friday Old Navy gets hundreds of new products in, and like clockwork, customers buzz around the store picking up the latest trends. The idea of picking up trends and then getting rid of them months after is becoming the new norm for American consumers.

Retail employees watch styles that are only popular during one season sit in the clearance section for the next few months after. The price of these temporarily trendy items slowly dwindles to nothing until someone finally purchases it. Gretna Old Navy store manager Kaia Sullivan says, “I think working in retail has made me more selective with what I buy. It’s eye-opening to see how quickly styles change and how fashion trends come and go and how some things stay consistent.” She says being around fashion every day has helped her become a smarter shopper. Those who aren’t attentive to the way retail works often get persuaded by social media and influencers of today. You could see a trend on Pinterest or Insta- gram, three weeks later, it would be in the store. Hawkins says “I feel like I have never realized how fastly fashion really comes in and out.” Only a few select items remain consistently in the store. This cycle of new emerging trends, mass producing them, and then their inevitable social death, polluting thrift stores and second-hand shops.

Although Old Navy’s products are not necessarily of bad quality, they’re still made unsustainably. Making clothes quickly and cheaply in other countries promises customers the latest styles at low prices. When looking around the store, you’ll find that over half of the merchandise is made in Vietnam. The other half is produced in countries India and China. Outsourcing the production of clothing saves fast fashion companies like GAP INC. lots of money. These companies can sell clothes for so cheap because they’re paying less for the production. Producing clothes in these countries leads to environmental and economical problems over there and here at home.

In addition to having more affordable clothes, having weekly deals and super cash persuades customers to keep coming back. Retail companies can dictate the minds of their customers. If you see that a shirt you like is 40% off for today only, you’re more plausible to buy it. Was it a necessity? No, but many consumers have developed a provisional mindset when it comes to what they put in their closets.

“I see people who are just looking to kill time and spend money,” Hawkins said. “We rarely have people who are shopping for necessity.” Every customer that goes through the checkout line gets bombarded with deals and programs. “Do you have a loyalty account with us?” “Let’s get you signed up!” “Are you shopping with an old navy card today?” “It’s 40% off your purchase if you sign up today!” “Don’t forget to come back and spend your $60 super cash at the end of the month!”

By the end of the first week, you memorize the phrases. Employees are given daily goals and prizes for how many people they sign up for cards and loyalties. At this point cashiering is like a game of how many points you can get by the end of the day….they also have a scoreboard…I mean “store success tracker.”

The company pressures employees so much for these sign-ups because it keeps customers coming back. The more you spend, the more coupons you get, the more you “save.” Programming the minds of consumers is a problem that is only getting worse as technology and marketing advances. Commercials, sales, social media, all of these follow us around 24/7 telling us to “Buy! Buy! Buy!” Convincing us to purchase things we don’t need. Present generations are developing irresponsible buying habits, giving into a corrupt system.

The fast fashion industry is booming, and the morals of these companies are left unchecked. If this practice continues to grow in acceptance, it can destroy our planet, economy, and lifestyle. With companies worried about profit, and consumers concerned about getting the best deals; they often forget that trends don’t last and that overproduction will be an issue in stores and our environment.