The C-Store is closed… Why?

Staffing shortages cause problems for schools 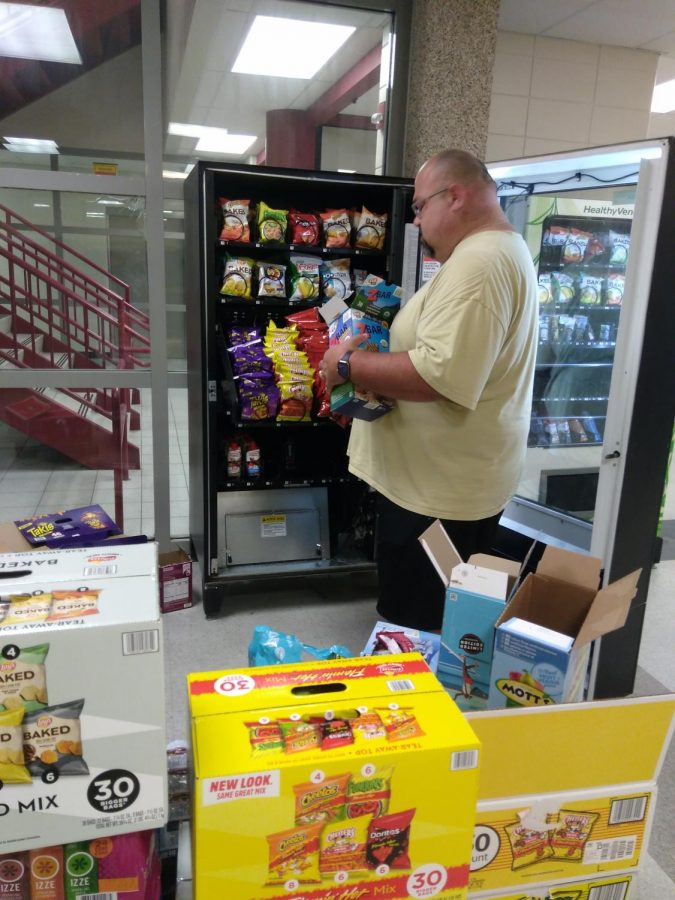 Nick Stuto of J&B Enterprises restocks the vending machine in the 100 commons after school. Stuto says he is coming twice a week now to restock. The most popular item is Takis, he said. Photo by Christine Kaldahl

Many students at Millard South are feeling the effects of the C-Store being closed at lunch. It’s open before school, but it’s never open during lunch as it used to be. The problem may be minor, but it’s indicative of a larger issue: a staff shortage

The short and sweet answer as to why the C-Store is closed, is that there is a district-wide staffing shortage in Food Service, and Millard South doesn’t have enough kitchen workers to manage both the serving area and the C-Store during the lunch block.

Jennifer Fleming works for the District and is in charge of “growth and engagement.” She supervises school kitchens, and is responsible for keeping them and their food appealing to students. She was kind enough to give some insight.

“We hated having to decide to shut down the C-Stores temporarily, but it was the best thing for the district as a whole for now,” said Jennifer Fleming.  Fleming works for the district and is in charge of growth and engagement. She supervises school kitchens, and is responsible for keeping them and their food appealing to students. “We were able to move staff around to focus on the meals. West and North High School C-Stores are also closed,” she said.

Justin Wiley, who is the General Manager for Food Services at Millard Public Schools, explained the situation through an email interview.

If you look at the job listings for the district, you can see over 20 opening positions in food service, three being at Millard South. When asked if this was normal, Mr. Wiley confirmed that it is not. “Typically at the start of a school year we have more open positions than any other time of year,” Wiley said  “This year we did experience an increase in the number of openings (approximately 10 more than a normal year), so it is not normal.  Because of the volume of openings we are experiencing a staffing shortage,” he said.

Those statistics were corroborated by Fleming. “No, the number of postings for kitchen positions is not usual. I have worked as a supervisor for 6 years, and this has been the most openings I have experienced,” she said “Food service has 24 openings in the district; most of the openings are in the secondary schools—13 in the high schools, 5 in the middle schools, and 6 in the elementary.  Plus, we are always looking for Substitute kitchen helpers too,” she said.

And that search is an active one.  as Fleming can be seen at school events working a recruitment booth. When asked what other efforts her and the district are taking to bring in new people, she said that they’re using the district website, social media, and job search sites such as Indeed and Careerlink. She also said: “My coworker and I spoke on the broadcast at the SHS football game. We will be going to another football game this year. We are offering incentive items to hopefully get the message out and get more people interested.”

The problem of finding workers is not just a Millard one.

“There is a city and nationwide staffing shortage in Food Service and many other industries,” Wiley said  “Nebraska was also recently highlighted as having the lowest unemployment in the nation. The biggest challenge to our staffing levels is that there are very few candidates out in the market,” he said.

Wiley cited a Klin article that indicated that Nebraska has, as a state, experienced a record drop in unemployment to 2.3 percent from 3 percent. This has the pro of meaning that most Nebraskans are working, but it also has the con of the competitive market making eligible employees harder to find. For students, that means that when positions become open in the kitchens, then the district has their work cut out to fill them.

Another impact of the C-Store closure is that students are instead taking their business to the vending machines. Thanks to Brian Oswalt, there are statistics available to gauge this. Brian Oswalt is a Veteran, a Pilot for FedEx, and most relevantly: He owns and stocks the vending machines at Millard South. Mr. Oz explained that the daily income from the machines has almost doubled since before Covid (the last time things were normal.) He detailed that, “a typical day at Millard South [now] has about $250 in sales each day.  In 2019, pre-Covid, the school averaged about $150 a day… This is the case at all my schools where C-stores are not up and running, not just South.”

Students are still wanting to purchase the snacks that the C-store offered, it’s now the vending machine’s job to satisfy that hunger. That works fine for items such as chips and soda, but it leaves a lot to be desired. Many students purchased items at the C-Store that the vending machine cannot supply such as Frozen Yogurt and special hot lunches.

When asked if she knew how and when the issue would be resolved, Jennifer Fleming wasn’t able to answer definitively, but was able to give the district’s plans for the future. “We [added] new Floaters positions; these are new this year. Our hope was the floaters would fill in for staff who needed to take a day or were out sick. We will continue hiring for our substitute list as well. We have looked at possibly going with a temp agency to help fill in until more people are employed.”